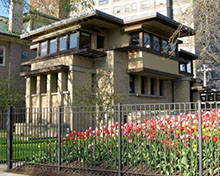 The Emil Bach House construction follows Wright’s 1911 return from Europe, commencing as his Midway Gardens project was completed in 1914, and before his departure to Japan in 1916 to oversee construction of the Imperial Hotel. While adopting the vocabulary of Wright’s Prairie house, the Bach House looks toward future stylistic directions in Wright’s work, in its contained geometry, efficient scale, and modern window designs with white, green, and orange-yellow shapes, evoking the rhythmic triangles of Midway Gardens’ windows, none of which survive.

This richly conceived yet intimately scaled residence was built in 1915 for Emil Bach, president of Chicago’s Bach Brick Co. The house stands near the shores of Lake Michigan on Chicago’s North Side. It is often described as a summer residence, an idea refuted by Bach’s wife Anna, who would later recall, “…it was never built as a summer home, …it was planned and built for a permanent home and a thing of beauty.”

While many of Wright’s Prairie houses are situated on wide suburban lots, the Bach House stands on a small city lot along a busy urban thoroughfare. The plan of the house is compact. On the ground floor facing Sheridan Road, the living room projects out from the central square core of the plan, echoed at the rear by a projecting porch. On the upper floor, cantilevered room projections are positioned at each arm of the cruciform plan. The projections contribute a sense of dynamism to the building’s geometric composition. A horizontal band of windows on the second level and a sequence of vertical mullions and deep-set windows on the main level articulate the façade. Dark brown trim delineates the exterior of cream-colored brick and stucco, which has a yellow cast in sunlight.

In contrast to the expansive, open Prairie houses Wright designed prior to his European sojourn, the Bach House is strongly centered and self-contained. A flat roof with cantilevered projections shelters the residence and shades the small balconies off each of the bedrooms. The main entrance to the house is at the south side, away from the busy road on which the house sits, and obscured from public view. In place of the wide expanses of leaded glass in Wright’s typical Prairie houses, the casement windows on the ground level of the Bach House are recessed and framed by wide mullions of brick. An open porch spans the back of the house and creates a dramatic horizontal projection toward Lake Michigan, originally clearly in view but now impaired by subsequently constructed residential towers.

The interior plan of the house is anchored by a central fireplace, around which the living room and dining area wrap, with a small, enclosed kitchen completing the encircling rooms. Built-in seating around the hearth, along the front windows, and a built-in dining table maximize space for circulation. Dining, seating, bookcases and storage are all efficiently integrated into one harmonious organic plan. The interior walls match the color of the home’s exterior with wood moldings and furnishings of black walnut. Instead of changing the interior palette, room to room, as he did in his other Prairie style houses, Wright used only one color throughout the house, uniting his interior and exterior palette

Anna Bach wrote, “All of the wood and furniture was black walnut, left in its natural color without stain and waxed to a perfectly satin finish…. The original color of the walls was one of Mr. Wright’s own choosing and mixing and he called it ‘Sunshine.’ We were never able to get a painter who could get it exactly right but it was simply beautiful with the rich brown satin of the wood work!”

The Emil Bach House was designated a Chicago Landmark in 1977 and placed on the U.S. Register of Historic Places in 1979. In 2013 the building was meticulously restored to its original appearance.

STAY AT THE BACH HOUSE

The Bach House is Chicago's only Wright residence open for vacation rentals and private events. Enjoy a one-of-a-kind experience, whether for business or pleasure. 773.764.9851.
More >